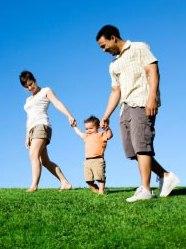 Editor's note: In this article, Pope Francis urges world leaders to be especially attentive to the rights of children. Pope Francis also reminded the UN that "the first teachers of every child are his or her mother and father, adding that the Universal Declaration of Human Rights describes the family as the 'natural and fundamental group unit of society'."

When the Marriage Reality Movement advocates for the Fundamental Right of Children to grow up with their mom and dad, united in marriage, this right protects this "natural and fundamental group unit of society", from the very beginning of that family's existence. A couple that has decided to become irreplaceable to each other through marital union positions themselves to be ready to receive the gifts of children, as they come forth from that union. These children also become part of the irreplaceable relationship of this couple, and we describe this relationship as "the family."

For more insight on this concept of irreplaceablility, read this article on our website: What is Marriage in Reality? Check out other areas in the The Movement, and Formation areas as well. Be sure you scroll down the pages for additional content. Click on links of explanations to gain deeper understanding!

VATICAN CITY(CNA) Pope Francis told the United Nations Friday that denying the existence of human life in the womb through abortion does not solve problems.

“Unfortunately, some countries and international institutions are also promoting abortion as one of the so-called ‘essential services’ provided in the humanitarian response to the pandemic,” Pope Francis said in his address to the UN Sept. 25.

“It is troubling to see how simple and convenient it has become for some to deny the existence of a human life as a solution to problems that can and must be solved for both the mother and her unborn child,” the pope said.

Speaking to the high-level meeting of the UN General Assembly via a video message, Pope Francis said that the problem of today’s “throwaway culture” was rooted in a disrespect for human dignity.

“At the origin of this ‘throwaway culture’ is a gross lack of respect for human dignity, the promotion of ideologies with reductive understandings of the human person, a denial of the universality of fundamental human rights, and a craving for absolute power and control that is widespread in today’s society. Let us name this for what it is: an attack against humanity itself,” he said.

“It is in fact painful to see the number of fundamental human rights that in our day continue to be violated with impunity. The list of such violations is indeed lengthy, and offers us a frightening picture of a humanity abused, wounded, deprived of dignity, freedom and hope for the future,” he continued.

“As part of this picture, religious believers continue to endure every kind of persecution, including genocide, because of their beliefs. We Christians too are victims of this: how many of our brothers and sisters throughout the world are suffering, forced at times to flee from their ancestral lands, cut off from their rich history and culture.”

Pope Francis urged world leaders to be especially attentive to the rights of children, “particularly their right to life and to schooling,” acclaiming the example of Malala Yousafzai, the young Pakistani advocate for female education.

He reminded the UN that the first teachers of every child are his or her mother and father, adding that the Universal Declaration of Human Rights describes the family as the “natural and fundamental group unit of society”.

“All too often, the family is the victim of forms of ideological colonialism that weaken it and end up producing in many of its members, especially the most vulnerable -- the young and the elderly -- a feeling of being orphaned and lacking roots,” Pope Francis said.

“The breakdown of the family echoes the social fragmentation that hinders our efforts to confront common enemies,” he added.

In his speech, Pope Francis said that the coronavirus pandemic had highlighted the urgent need to “make every person’s right to basic medical care a reality” and exposed “the rapidly growing inequality between the super-rich and the permanently poor.”

“I think of the effects of the pandemic on employment … There is an urgent need to find new forms of work truly capable of fulfilling our human potential and affirming our dignity,” he said.

“In order to ensure dignified employment, there must be a change in the prevailing economic paradigm, which seeks only to expand companies’ profits. Offering jobs to more people should be one of the main objectives of every business, one of the criteria for the success of productive activity.”

Calling on the international community to “put an end to economic injustices,” the pope proposed instead an economic model that “encourages subsidiarity, supports economic development and invests in education and infrastructure benefiting local communities.”

The pope also renewed his appeals that the poorest and the most vulnerable be given priority in an effort to ensure access to COVID-19 vaccines and for the forgiveness of debt burdens for the poorest nations.

For the first time in its history, the UN General Assembly is virtual this year, with world leaders delivering pre-taped remarks via video link due to the coronavirus restrictions on travel to New York. The UN is commemorating this week the 75th anniversary of its founding.

This was Pope Francis’ second speech to the UN General Assembly in the seven years since his election. It was the sixth time that a pope has addressed the UN, following Pope Paul VI in 1964, Pope John Paul II in 1979 and 1995, and Pope Benedict XVI in 2008.

In his video message, the pope expressed strong support for multilateralism, that is, the partnership between multiple countries pursuing a common goal.

“We need to break with the present climate of distrust. At present, we are witnessing an erosion of multilateralism, which is all the more serious in light of the development of new forms of military technology, such as lethal autonomous weapons systems (LAWS) which irreversibly alter the nature of warfare, detaching it further from human agency,” he warned.

The pope said that recovery from the coronavirus pandemic presented a choice between two paths.

“One path leads to the consolidation of multilateralism as the expression of a renewed sense of global co-responsibility, a solidarity grounded in justice and the attainment of peace and unity within the human family, which is God’s plan for our world,” he said.

“The other path emphasizes self-sufficiency, nationalism, protectionism, individualism and isolation; it excludes the poor, the vulnerable and those dwelling on the peripheries of life. That path would certainly be detrimental to the whole community, causing self-inflicted wounds on everyone. It must not prevail.”