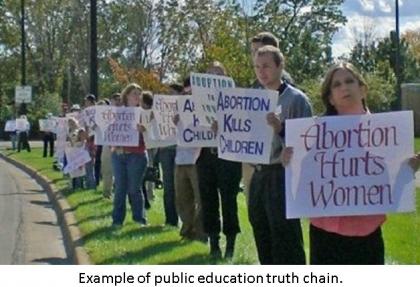 Goal: Resist corruption of marriage in the culture by advancing specific positive themes and messages to reintroduce marriage.

The first step for rebuilding a marriage culture is reintroducing the reality of marriage to a culture that has forgotten its meaning and purpose. With this in mind, San Francisco marriage reality leader, Ted Kirk, has announced the second annual San Francisco educational Marriage Truth Chain for Sunday, April 15, 2018.

"Many people got discouraged because of the Supreme Court decision. I hear about marriage protest rallies, but nothing seems to be happening. Marriage is too important. The redefinition of marriage is confusing young people and undermining their faith in Christian teaching about God's plan for marriage and family. That is why we decided to organize the Marriage Truth Chain. We need to keep fighting, but in a positive way with public education to reintroduce marriage in ways people can understand it."

"We need to let people know what we are for, not against," Kirk said.

This educational rally is exclusively focused on Marriage Truth. People know that marriage has been redefined to permit same-sex couples to marry but what they fail to understand is the real consequence of redefining marriage. There is no such thing as "same-sex marriage" in the law. Instead, the Supreme Court made the change by eliminating the only institution that specifically unites children with their mother and father (marriage between one man and one woman as a unique and privileged civil institution).

"The Court's marriage decision enshrined the principle of marriage and family equality," said Bill May, president of Catholics for the Common Good Institute. "Now children must be taught that marriage is merely a lifestyle choice with nothing to do with procreating children and the foundation of the regular family. Children must also be taught that family diversity is a good thing meaning that having more families with children deprived of their moms and dads united in marriage is a good thing. That is a lie!"

Signs will be provided. Messages are designed to be educational and are geared to provoke thought, not conflict, about the reality of marriage that most people have forgotten.

For example, messages include:

The goal of the Marriage Reality Movement, a coalition of like-minded people and organizations, is to take back marriage for our children and family. That starts by educating people about what marriage is in reality. The word "marriage" has been redefined, separated from its reality, and no longer means the institution that from the beginning of time specifically unites children with their mother and father. Not every man and woman living in true marriage has children, but every child has a mother and father — their own mother and father.

"Members of the Marriage Reality Movement will not rest, until the reality of marriage once again becomes a privileged institution that is supported and promoted by every law, every public institution and every curriculum," May said.