More Americans Living Together, Having Babies Before Marriage 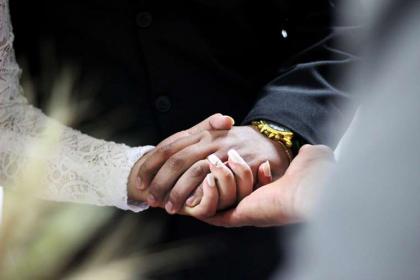 DENVER, CO (CNA) — While the average age of first marriages is higher than ever before, more Americans are cohabiting and having children outside of marriage, according to recent data from the Pew Research Center and the Center for Disease Control.

In February 2018, the Pew Research Center reported that the median age of marriage in the United States was 29.5 years for men and 27.4 years for women in 2017. These are the oldest median marriage ages on record.

Perhaps unsurprisingly, the percentage of cohabiting Americans is also climbing.

Last month, the Institute for Family Studies discussed a study on cohabitation released by the Center for Disease Control’s National Center for Health Statistics. The IFS concluded that 64.5 percent of participants in a study of Americans age 18-44 had “cohabited with a romantic partner at some point outside of marriage.”

“Other estimates not based on this specific report are that the percentage of people living together before tying the knot is now at an all-time high of over 70 percent,” the IFS reported.

Calling cohabitation a socially “normative behavior,” the article noted an 82 percent increase  between 1987 and 2010 of women who have cohabited at some point, as reported in a study by demographer Wendy Manning.

Cohabiting couples are also increasingly more likely to have children. There has been a 15 percent increase in cohabiting parents from 1997 to 2017, a Pew Research study found.

“Due primarily to the rising number of cohabiting parents, the share of unmarried parents who are fathers has more than doubled over the past 50 years,” Pew reported.

“Cohabitation has greatly increased in large measure because, while people are delaying marriage to ever greater ages, they are not delaying sex, living together, or childbearing,” the IFS said, noting that “almost all of the increase in non-marital births in the US since 1980 has taken place in the context of cohabiting unions.”

When children are born to cohabiting parents, their parents’ relationships gets complicated, the Institute asserted, and makes for tricky situations down the road than if the parents were to separate.

The IFS also noted the complicated relationship between cohabitation, marriage, and divorce.
While studies have shown that the percentage of cohabiting couples who break up is on the rise, cohabitation is also found to increase the likelihood of marriage caused by relationship “inertia.”

In a study titled, “Sliding Versus Deciding: Inertia and the Premarital Cohabitation Effect,” the authors explore the concept of “inertia” in the ever-increasing phenomenon of cohabitation.

“We suggest that some couples who otherwise would not have married end up married,” due to the binding situation that cohabitation creates for a couple, said the abstract.

“We discuss practice implications for relationship transitions that are characterized more by sliding than deciding, especially where a transition such as cohabitation increases inertia to remain in a relationship regardless of quality or fit,” it said.

Even when it leads to marriage, a multitude of studies have shown that many relationships that begin in cohabitation are short-lived, unstable and unhappy.

The IFS said that “this added risk is compounded by the fact that most couples slide into cohabiting rather than make a clear decision about what it means and what their futures may hold.”