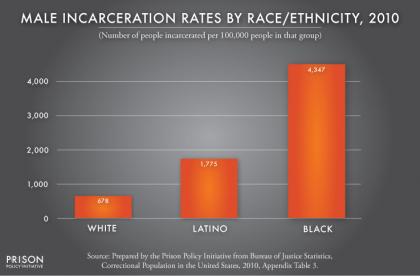 (City Journal) As riots in Ferguson and Baltimore heated up this past winter and spring, so did denunciations of a criminal-justice system that has placed a disproportionate number of black men behind bars. One widely aired theory holds that not only are racial disparities and mass incarceration patently unjust on their own terms, but they also lead to chaos in poor urban families. Black men’s absence “disrupts family formation, leading both to lower marriage rates and higher rates of childbirth outside marriage,” pronounced a widely discussed New York Times article, “1.5 Million Missing Black Men.” Hillary Clinton auditioned the theory in the first policy speech of her presidential campaign. “When we talk about one and a half million missing African-American men,” she said at Columbia University in April, “we’re talking about missing husbands, missing fathers, missing brothers.”

The missing-men theory of family breakdown has the virtue of being easy to grasp: men who are locked up are obviously not going to be either desirable husbands or engaged fathers. It also bypasses thorny and deadlocked debates about economics and culture. Still, it has a big problem: it’s at odds with the facts.

Consider the first graph (below), which traces the percentage of births to black unmarried women between 1960 and 2013. As the sixties began, 20 percent of all black births were to single mothers. By 1965, black “illegitimacy,” in the parlance of the time, had reached 24 percent and become the subject of Daniel Patrick Moynihan’s prophetic but ill-fatedreport “The Negro Family: The Case for National Action.” That number, startling at the time, turned out to be only the ground floor of a steep 30-year climb. By 1980, more than half of black children were born to unmarried mothers. The number peaked at 72.5 percent in 2010.

Now look at the second graph, tracing the number of black men admitted to state and federal prisons over this same period. In the 1960s and early 1970s, as nonmarital births raced upward, mass incarceration was not yet a glimmer in policymakers’ eyes. The black prison population hovered at a relatively low level, showing no serious trend up or down. In 1975 came the first signs of a clear increase, but it wasn’t until 1980 that the numbers of black men admitted to state and federal prisons really mushroomed. (Though the graph doesn’t show it, the same trends were true for white men, though their prison-admission rate per 1,000 is far lower.) Throughout the 1990s and most of the first decade of the 2000s, the prison population grew to historical highs. In 2008, the black (and white) prison population peaked; since then, it has declined, though only slightly.

The two graphs together show that the black family was in deep disarray well before America’s experiment in mass incarceration. If anything, the timing of the two problems points to the opposite causation from the one assumed by “missing-men” theorists: as the family unraveled, crime increased — the homicide rate doubled between the early 1960s and late 1970s, with more than half of the offenders being black — leading to calls for tougher sentencing and more bad guys behind bars. In other words, family breakdown led to more crime and more crowded prisons. That theory also jibes with abundant research showing that boys who grow up without a father in the home are at greater risk of criminal behavior.