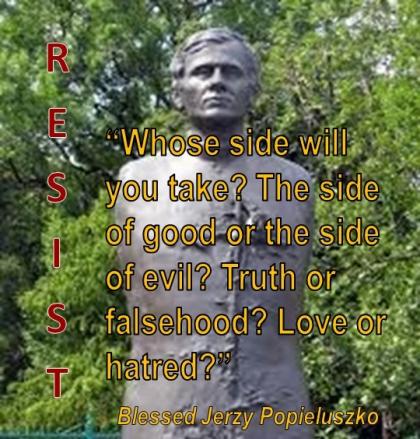 How do we fight this culture that is corrupting our children's understanding of love, sexuality, marriage and family? Not by anger. Not by hatred. But by love and by resistance. We call this, "living in truth," after the challenge of Vaclav Havel slogan that ignited Eastern Europe under the tyranny of the culture of communist lies.

How do we resist?

Following St. John Paul II's challenge during a visit to Poland to "vanquish evil with good," Blessed Jerzy Popieluszko "demanded resistance - people should live 'as if' they were free, refusing to participate in the continuing culture of lies"[1]

We must create a resistance by refusing to use terms that undermine our witness of truth to our family and friends: terms that mislead and have lies embedded in them. Blessed Jerzy Popieluszko, the martyr priest, led a resistance against the communists by telling people to refuse to repeat the lies of the communist culture and instead continuously repeat the truth about the dignity of the human person and the family, over and over and over again. We must do the same!

But like the Polish people, we are so used to hearing the lies of the culture that we easily fall into the trap of repeating them without even realizing. Our research discovered that we also unwittingly use language that subtly includes things that aren't true which obviously undermines our efforts to witness the truth about marriage, sexuality, love and the family.

Do you know most of the terms related to marriage, family and sexuality were created by the same people who are trying to destroy the regular family? It is more obvious with anti-life related terms like "pro-choice" or "reproductive rights." With marriage and family issues, it is more subtle and we tend to use common terms that already have lies embedded in them.

The first step is becoming aware of the lies and untruths. We must continually ask, "Do the terms and expressions I am using conform to reality? Once you become more aware of reality, you will be surprised at the answers to the question. To get started, we will offering terms over the coming weeks to watch out for and ditch from our usage.

At first, the problems with the terms to ditch won't be obvious, so we will provide analyses to explain how they undermine witnessing the truth. Eventually you will learn how to analyze terms yourself, and become an effective resister.

More to come. Check back.