Remember, the Children are Listening 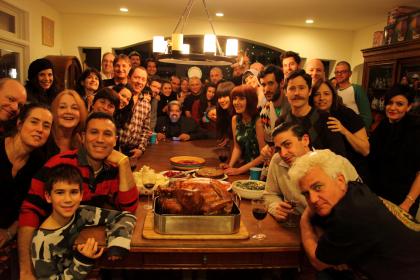 Years ago, I lived in Mobile, Alabama, which was a wonderful cultural experience for a north eastern-raised, transplanted Californian. While there, I had the great fortune to meet someone I would call affectionately a character, a consummate Southern gentleman in his genteel mannerisms and language from a bygone era.  I still chuckle to this day over his reference to the Civil War as “those recent unpleasantries.”

If your family is like mine, as holiday gatherings approach we are thinking of ways to avoid a civil war or any kind of conflict as the extended family gathers with all of their diverse opinions on religion, marriage, lifestyles and related issues of the day. There is always a tension between a sense of obligation to witness the Gospel, particularly for the sake of the children, and staying quiet for the sake of peace. Love and perservance may be the best course of action while saving delicate discussions for a better time and place.

However, if a debate does start, remember that you are not going to change anyone's mind. They have their beliefs and you have yours. The  goal is to avoid a situation in front of the children in which you, in following your faith, appear to be prejudiced, unfair or unreasonable. Since we know how people who recognize the reality of marriage are characterized today, you may think such a goal is impossible. However, as counter intuitive as it may seem, it can be done by following the advice of the great theologian Frank Sheed. Don't debate to win; "Always debate to reveal truth."

In other words, as we emphasize in our workshops, remember the most important audience is usually those overhearing the conversation, rather than the person with whom there is a difference of opinion. Since you are not going to change their mind, the objective for members of the Marriage Reality Movement is to plant seeds of truth about love and marriage in ways that our children can understand and embrace. Be conscious of the audience.

The most important tip is to pick your battles and change the focus of the discussion, approaching marriage from the perspective of the child (c.f. Luke 10:21: "…You have hidden these things from the wise and the learned and revealed them to children”). Changing the frame of reference moves the conversation away from the loaded words and subjects that lead to conflict and exposes reality (truth) at the same time.

Here are some tips that may be helpful finding a way to plant seeds of truth that hopefully will provoke thought rather than conflict.

Protesting the gay lie: Personally, I have developed a habit of remembering that the terms "gay" and "lesbian" are lies: there are no gay or lesbian persons in reality. That may sound shocking, but in reality there are only persons who are infinitely and unconditionally loved by God and are destined for eternal life. The recognition of sexual identity obscures the fact to them and to us that they are much more than that identity, as Cardinal Ratzinger (Pope Benedict XVI) taught. My way of protesting the lie that the term gay or lesbian represents and witnessing to the person’s dignity is to simply substitute the phrase, “a person who has taken on a gay identity.” As St John Paul II taught, the only proper and adequate response to the human person is love.

Many of the concepts in these tips may be new. They are meant to be thought-provoking as part of a process that helps people discover the reality of God's plan for marriage and the family. I hope they will be helpful, not only at Thanksgiving, but at any family gathering.

The final tip is to turn to the Holy Spirit to guide you prayerfully in what you say and how you respond. Pray for peace in knowing that our role is limited to witnessing reality (truth) at times and in ways so that people can hear it, then shut up and turn the rest over to the Holy Spirit.

______________________
1 Since marriage has been redefined, it can not be claimed that it has any purpose for uniting a man and woman with each other and any children born from their union. That is no longer its purpose and to claim other wise violates the principle of marriage equality.